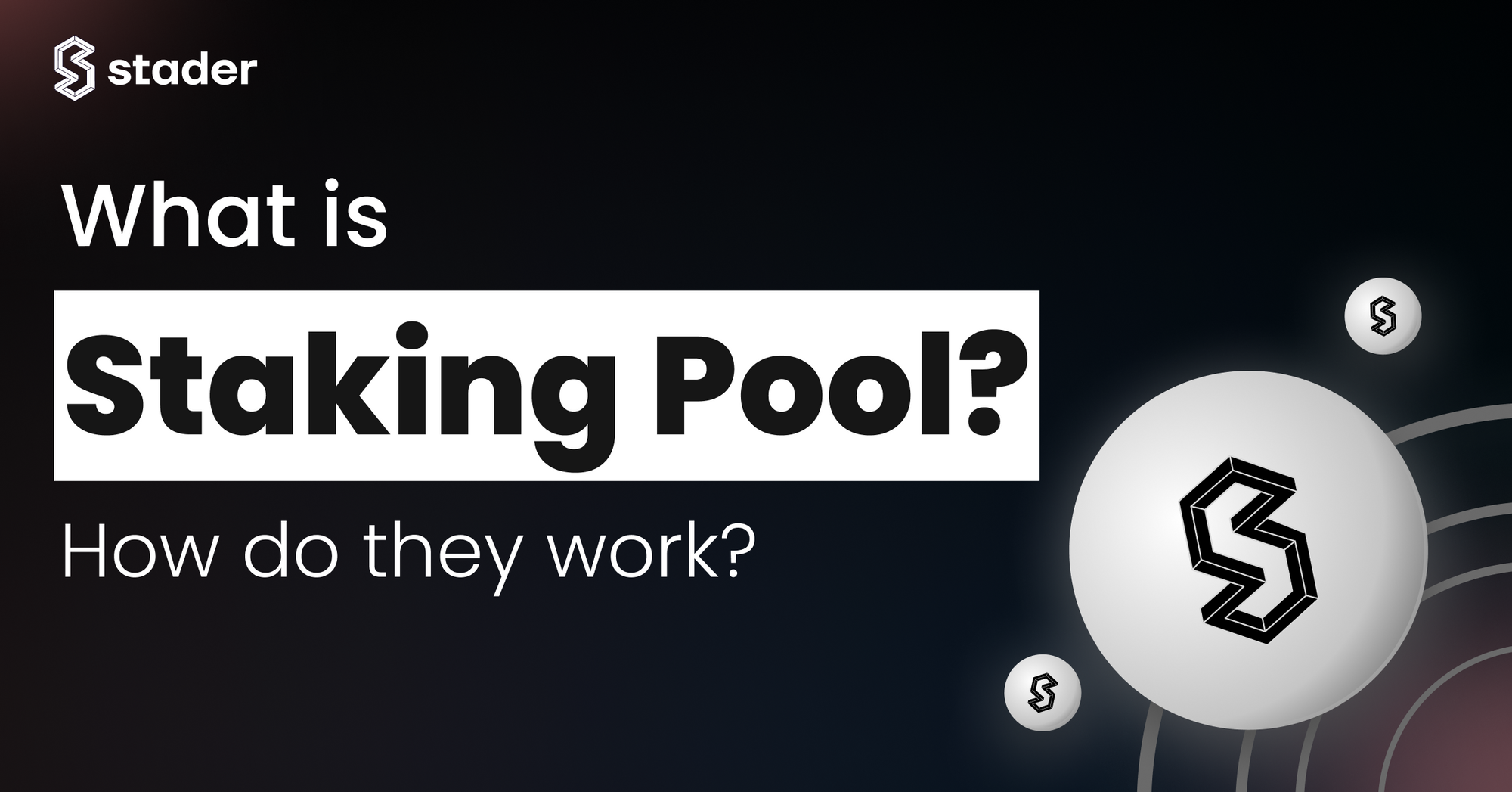 What is a Staking Pool?

What is a staking pool, is it the same as a mining pool? How do they work? Why should you join one? What disadvantages does it have, can we mitigate them? Here’s the ultimate guide to understand staking pools!

What is a staking pool?

A staking pool allows many stakeholders to pool their staking power and computational resources to validate and verify new blocks, thus increasing their chances of obtaining rewards in return.

This staking pool model is an alternative to mining, used in the PoW (Proof-of-Work) consensus mechanism. However, the idea of staking pools is only possible in PoS blockchains (Proof-of-Stake), and instead of miners pooling computational power (energy-intensive mining takes place in PoW) validators (in PoS) pool their stake.

How do staking pools work?

Usually, different stakeholders stake their funds in a staking pool managed by a third party, so they have their coins locked in a specific blockchain address (or wallet) for a certain period of time. However, there are alternative pools, not all are managed by pool administrators: there are safer staking pools, in which you can deposit your stake power while maintaining ownership of your funds in your personal wallet. These pools are known as cold staking pools, which, like cold wallets, allow users to hold their funds in a hardware wallet or cold storage.

Why stake with a pool?

Staking pools Vs. Solo staking Vs. Staking as a Service

Which option is better? To do solo staking, to join a staking pool, or to perform Staking as a service (SaaS)? Well, let's walk you through the benefits and disadvantages of joining a staking pool over the other two options:

Disadvantages of Staking Pools and how to mitigate them

Liquid Staking and how it address staking problems

Proof of Stake assets have become the dominant asset class in the blockchain space, and this is in part due to the staking rewards that individuals and institutions can earn through a staking protocol. PoS and, therefore, staking have proved to have benefits over mining. However, as it have been detailed before, there are risks associated with the concept of staking, particularly unbonding periods, which limits a user’s ability to transfer, trade, or use the asset as collateral to participate in DeFi. Liquid staking solves this problem by giving institutions and individuals the ability to stake assets, and in turn, receive a liquid representation of that asset in return that they can freely transfer, trade, or use in DeFi. Benefits of liquid staking include:

By choosing Stader to stake with your favorite blockchain protocol (Hedera, Polygon, BNB, Fantom, Terra 2.0, NEAR, and soon Ethereum and Avalanche) you receive also a liquidity token in return, for example, NEARX or MATICX, that you can also use in other DeFi platforms at the same time that your staked funds generate frequent staking rewards. So, basically, your benefit doubles with liquid staking platforms.

It’s safe to assume that liquid staking will proliferate through the entire PoS ecosystem in 2023, and there are already plenty of teams building liquid staking solutions on protocols like Stader: Liquid staking is a major upgrade in the blockchain industry, and liquid tokens are said to be the 3rd generation cryptocurrencies.

As blockchain infrastructure matures, it is important to have multiple and easily accessible entry points for new users, whether they are individuals or institutions. Because of its accessibility and core value proposition, liquid staking is one of the best options for increasing the amount of assets staked, and in turn, increase protocol security rather than decrease it. The liquid staking market is still in its early stages and most liquid staking protocols are less than a year old. That said, it seems clear that liquid staking is here to stay, and staked assets will likely be the foundation of the next generation of financial products built on Web3 protocols.

By subscribing you accept our